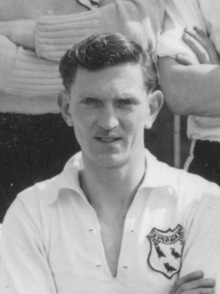 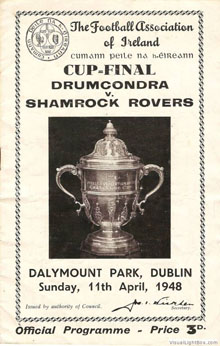 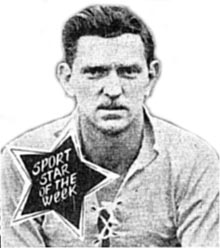 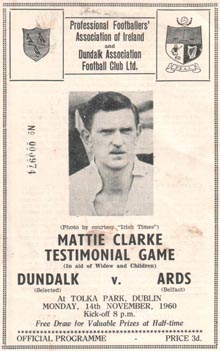 By the time veteran full-back Mattie Clarke came to Oriel Park for the 1951-52 season he was already a League of Ireland ‘great’ and a 13-season Shamrock Rovers hero, with five FAI Cup finals on his CV, four of them as a winner.

A pupil at the CBS at St James’s St, he was a Gaelic football midfielder who also played soccer with St Francis Boys and later Drumcondra Juniors, where he earned Junior International honours against England playing at right-back.

He started in 1939 with Shamrock Rovers as a full-back until someone remembered that while with Drumcondra Juniors he had scored 21 goals in 9 games. After scoring two with the reserves he found himself on first team duty as a result of injuries and on his senior debut he proceeded to score a hat-trick against Waterford.

But eventually he settled into the right-back position and became one of the most outstanding League of Ireland defenders of the 1940s. With the Hoops he added further to his representative honours with one International Cap and 9 League of Ireland Inter-League appearances. In the summer of 1945 Dundalk had attempted to attract him from Rovers but the fee demanded was too stiff.

He eventually found his way to Oriel Park in the summer of 1951. Starting with Dundalk at his favourite full-back spot, team injuries and poor pre-Cup form saw Mattie moved to centre half and the fledgling Tommy Traynor assigned to the left full spot for the never-to-be-forgotten first round Cup game against St Patrick’s Athletic.

An inspired move or an act of desperation? Whatever the reason it paid off big time and Dundalk survived to make their way into the hat for the second round—come the season’s end Dundalk had captured the FAI Cup against all the odds, Mattie had another winner's Cup medal and Tommy Traynor was on his way to Southampton and fame.

Captain, mentor, inspiring figure, a rock at the heart of the defence—Mattie’s displays against Cork Athletic in the final and the final replay earned him the Irish Independent‘s award as Sports Star of the Week and the undying gratitude of Dundalk supporters.

By this stage they had raised Mattie from the ‘devil’ that had broken their hearts while he was with Rovers to a haloed spot in the pantheon of Oriel Park heroes. Nor did it affect that relationship when some years later he led non-league Workmen’s’ Club to a shock FAI Cup win over Dundalk.

The scourge of League of Ireland wingers, and the most feared back in Ireland, he was also one of nature’s gentlemen, commanding respect in whatever jersey he wore, and his tragic death in a car accident in January 1960 was mourned throughout the football community.

It was an indication of his popularity that in November of that year the recently inaugurated Professional Footballers Association organised a testimonial match at Tolka Park between a Dundalk Selection and Ards, with the proceeds for Mattie’s dependents.

His son Jackie, who received youth and amateur International caps, played with Shamrock Rovers and made his debut against Dundalk in a late season League game in April 1966. After guesting with Glasgow Celtic in an Italian Youth tournament in the summer of 1968 he signed professional forms with Celtic.

He returned to Ireland a year later, joining Bohemians in their first year as a professional club and won an FAI Cup medal that year, coming on as a half-time substitute in the deciding tie of a triple-decker final against Sligo Rovers, when Bohs came back from a half-time deficit to take the Cup on a 2-1 scoreline.

Irish Independent’s Sportstar of the Week (25th Apr 1952) citation: “Gave brilliant displays…outstanding…played captain’s part…in both the drawn Cup final on Sunday and the replay on Wednesday”