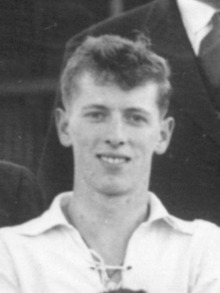 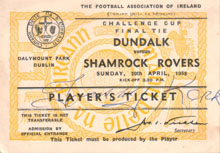 From Drogheda, Tommy Kerr had two spells with Dundalk. A tricky winger who could play on both flanks, he had a good right-footed shot and specialised in free kicks around the penalty box. After his debut in the 1954-55 season opener against Bohemians in the City Cup, he competed with Pa McCabe for the left wing spot and finished the year with sole possession of the no. 11 shirt.

He didn’t rejoin Dundalk until after Christmas 1957, taking the place of Mick Murray on the right wing, and making his debut on the same occasion as Hughie Gannon. When Niall McGahon was restored to first team duty in March and George Hoey was injured, Tommy finally started in his favourite left wing spot, and on April 20th 1958 was the proud possessor of an FAI Cup final winner’s medal after Shamrock Rovers were defeated 1-0.

In the Dalymount final “he gave Mick Burke a troublesome afternoon and his delightfully accurate crosses were a constant source of worry for the Rovers defence” (Irish Independent) and he played a key role in the two decisive moments of the game. His centre resulted in the winning goal from Hughie Gannon and minutes later he conceded a penalty, missed by the usually reliable Liam Hennessy.

After his Dundalk spell he returned to play with the ambitious Drogheda AFC, recently admitted to the Leinster Senior League Division II and with an eye to full League of Ireland status. They didn’t have to wait long—after winning the Polikoff Cup and the Leinster League Championship they were elected to the LOI for the 1963-64 year.

Tommy played in their historic first LOI fixture in an August City Cup match at Oriel Park when the newcomers nearly caused a huge upset, going down on a 4-3 scoreline to the League title-holders after being 3-2 ahead. They recorded their first victory on the following weekend at Flower Lodge against Cork Hibernians and Tommy scored from a penalty in the 3-1 win.

Under the management of ex-Ireland International Peter Farrell, Drogheda just avoided the re-election area. Tommy contributed three League goals and was released at the end of the season.