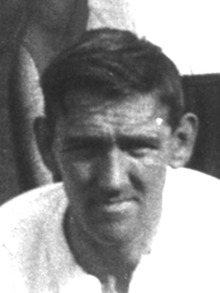 Gerry McCourt played with Dundalk for seven seasons from 1930 until he broke his leg in an FAI Cup game in 1937. Over most of the following 30 years he was team trainer-coach.

The Dundalk Democrat’s elegant tribute to Gerry McCourt on his death in July 1967 offered the opinion that if a Dundalk ‘Footballer of the Century’ vote was being taken, Gerry‘s name would top the list. For nearly 40 years, since he arrived at Dundalk in the summer of 1930, his name had been inextricably linked with the history of the club and with a variety of roles—player, captain, match-winner, trainer, coach, mentor, and for several generations of Dundalk players, at all levels, he was the man with the sponge.

From Lurgan, he had played for six seasons in the Irish League with Glenavon before making his Dundalk debut at the Athletic Grounds in August 1930, opening his account with a sweeping 7-3 League victory against Waterford.

Playing at inside left with Joe Donnelly on the left wing, his leading marksman 26 goals was a significant contribution to a club record 104 goals, to second place in the League and to Runner Up in the club’s first FAI Cup final appearance.

Gerry scored in each round of the Cup campaign and his score in the 30th minute of the final against Shamrock seemed to be enough until Paddy Moore’s 84th minute controversial equaliser. There was further controversy when Moore scored the only goal in the replay.

Two seasons later he became the first club captain to lift the League Pennant, but he never managed to secure the coveted Cup Winner’s medal—he again scored in a Cup final when Bohemians got the better of Dundalk by 4-3 in the 1935 Final. He participated in seven competition finals with Dundalk but finished with only one winner’s medal, earned for the Presidents Cup win in 1931.

He was a universal favourite, playing his heart out for the team, yet eminently fair and clean, a real gentleman of the game. For seven seasons he was the heart of the club…’never knows when he is beaten…has brought the game out of the fire more often than any body…uses his brains always…the best servant the club ever had’.

Gerry had already taken on the role of trainer during the 1935 Cup losing season and he would fill that position, on and off, for the next 30 years.

A broken leg suffered in an FAI Cup replay against Waterford in 1937 ended his playing career—although he togged out in 1940 in the midst of a crisis and managed another goal in five last outings. At the time of his accident his 89 goals set a new club high. He was many times honoured with his selection as trainer to Irish Representative teams, both at International and Inter-League level.

After a near-20 year absence he returned to Glenavon in 1947 and spent a couple of seasons in charge at Mournview Park.

In his many roles at the club, one of Gerry’s most important was talent spotting and encouraging and introducing several generations of local players to the club. By way of a last hurrah, he linked up again with his old playing comrade Joey Donnelly, when they masterminded Dundalk’s famous European Cup victory at Zurich in 1963.

Gerry first came to prominence in the 1921-22 season playing with Portadown Technical in the Schools Cup. For the following two seasons he was one of the most prominent players in the Portadown and District League, first with second division Parkside Rovers and later with Portadown Celtic.

For the 1924-25 year he was with Glenavon and his first senior Representative honour came at the end of that season when he played with the Irish Amateur XI against the Irish League Selection playing at inside left. He also represented Mid-Ulster against the North-West Association.

The ultimate accolade came in November 1925 when he earned a full Amateur International cap, scoring in a 6-4 loss to England at Maidstone.

Two of his sons distinguished themselves on the football field—Frank, born in Portadown, was a 6-time Northern Ireland International and played with Manchester City, and Jackie won two FAI Cup winner’s medals, playing starring roles in Dundalk’s 1952 victory and with Drumcondra in 1957.

At the end of the 1925-26 season, his second senior year, Ireland’s Saturday Night assessment contained the following: ‘McCourt is an amateur in the truest sense except in his style of play. He has embodied in his make up all the enthusiasm possible for the game, and has a fair turn of speed, but he also has ball-control and more than average ability. It is perhaps a failing with him to some extent that his command over the ball should be so pronounced, because we believe if this was not the case he would not attempt so much on his own.’