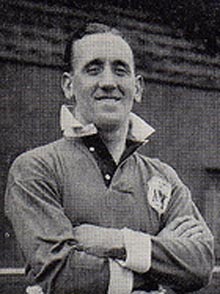 After a poor start to the 1946-47 season in the Dublin City Cup there were a number of recruitments for the Shield. On the recommendation of Jimmy Dykes, his former colleague from Hearts, inside forward Alex Sharp arrived at the beginning of October 1946.

He went straight into the first team and a closing 5-match unbeaten run just failed by a point to catch Drumcondra. Runner up medals were secured on the last day with a 6-3 win over Shelbourne and Alex provided a hat trick to bring his Shield campaign record to 6 goals from 6 appearances.

However, after a single point from the opening 3 League games Alex went home to Scotland for Christmas and never returned. Early in the season he had been with Albion Rovers, playing 1 game in the Scottish League Division B.

After a 6-3 Shield last series win over Shelbourne to clinch runner up medals, and recovering from a 3-1 half-time deficit, the man from the Democrat was reluctant to hand out too many plaudits even to hat-trick scorer Alex Sharp. “I am not writing down Sharp as having a bad game—far from it. But, in my view, until he scored he had not a good game, nor was he performing the defensive functions of an inside forward and his passes were going wrong in the first half.”