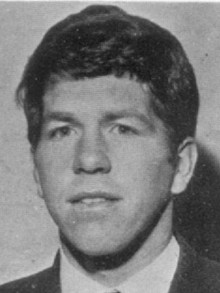 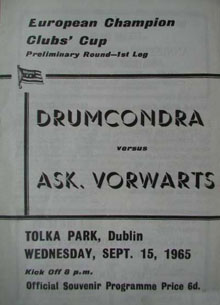 Fran Brennan’s schoolboy experiences were shared between GAA club Clanna Gaels and Association football nursery Johnville, where he started with the under 14 squad and had Mick Smyth and Eamon Byrne as teammates.

By the time he was seventeen he was part of the Shelbourne Youths squad under the tutelage of Gerry Doyle, making his senior debut at Turners Cross in a Shield game against Cork Celtic in November 1959.

However he failed to make the starting line up when Shels –Doyle’s Babes—captured the FAI Cup in 1960 with one of the youngest squads ever. He left the Reds in 1961 and spent a year with Transport under the management of Joe O’Brien, before moving on to Drumcondra.

By the time he came to Dundalk in the summer of 1966, Fran Brennan had a number of very successful seasons behind him at Tolka Park, and collected a number of representative honours.

He had been a member of the winning 1964-65 League championship squad and had been capped for Ireland, playing at centre-half in a Dalymount Park Friendly against Belgium in March 1965. In addition he was on the League of Ireland’s team for a prestigious game against Italian club Sardinia.

For seven seasons he was first choice for Dundalk’s right-full spot, missing just 26 games in the period. With Patsy McKeown as his full back partner and Alan Fox at centre-half, the trio bulwarked the defence in the 1966-67 drive to a trophy-treble haul of League Championship, Shield and Top Four Cup, adding two runners up honours in the City Cup and Leinster Cup.

The season’s losses were confined to seven—and two of them were in the finals of the Leinster Cup and City Cup.

The following season was disrupted by internal rows but Fran still collected a City Cup winner’s medal and runners up awards in the League and Shield. He was an ever-present for his first two seasons and missed his first club game in the middle of November 1968—after a consecutive run of 114 games.

In the 1971-72 year, under manager Liam Tuohy, he and Paddy Turner had the distinction of adding another Shield honour, becoming the only club players to participate on two winning Shield teams.

While with Dundalk he added three more League of Ireland caps to his CV, all played at Dalymount Park: a 3-2 win over the Irish League in Oct 1967, in a 7-2 mauling from the Football League the following November and finally in a 0-0 draw against the Scottish League in September 1968.

After the departure of Tuohy in June 1972, Fran took on the role of player-manager for one season until the appointment of John Smith. But he was not helped by the club’s perilous financial position which had resulted in the transfers of Sean Sheehy, Paddy Turner, Turlough O’Connor and Tommy McConville before the season started, leaving him with the previous year’s youth squad.

It is doubtful if the club ever fielded as young a squad in its 47 years membership of the League of Ireland. Fran failed to appear in only half a dozen games.

Following the arrival of John Smith as Dundalk manager in the Summer of 1973, Fran returned after an absence of twelve years for one season to Shelbourne. Apparently finished with League of Ireland football, he turned out for a number of seasons with Belgrove in the Leinster Senior League.

However in the 1976-77 season he was invited to help non-League Galway Rovers in the League Cup and provide experience to the largely amateur panel. Draws against Athlone and Finn Harps set up a virtual play-off against Sligo Rovers for section honours, but it was a struggle for the Senior team with nine full-time pros to secure a single goal victory.

Impressed by Fran’s performance manager Amby Fogarty invited him back for the following season, the Westerners inaugural senior season. Now playing as sweeper, and eighteen years after he made his League debut, he came back for one last hurrah, bringing his total League of Ireland games close to 500.

He finished his playing career with Bluebell United in the Leinster Senior League, spending half a dozen seasons as player-manager and turning out into his forties. In 2004 he retired from his final football involvement as assistant manager with the Ireland Under 15 squad, to Paddy Hilliard and Vinny Butler, helping to develop the careers of players like Paul McShane and Stephen Ireland, both future Internationalists.

An active member of the Professional Footballers’ Golf Society where he retains his links with many of his former colleagues, he won its President’s Prize in 2007.

Dundalk Democrat reviewing the Fairs Cup game against Glasgow Rangers: “A most stimulating team captain …. Ready and able to occupy more than one defensive position …. Comes forward given half-a-chance …. Carries a powerful shot.”