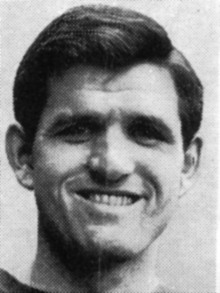 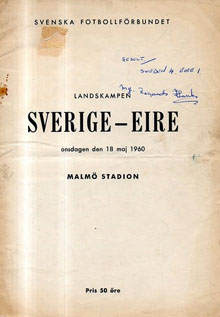 6 feet tall and just over 10 and a half stone, goalkeeper Maurice Swan was an all-round sportsman, with amateur boxing, Gaelic football and hurling amongst his activities. From Dublin inner city Ballybough, he had played schoolboy football with Stella Maris. Only 16 years old when he teamed up with Drumcondra, he made his first team debut in an August 1955 Shield game against Limerick and his outstanding display in a 2-1 win included saving a penalty.

Until he left for Cardiff City in July 1960 he competed for the Tolka Park number 1 jersey initially with Paddy Neville, and later with Alan O’Neill and Christy Barron. His transfer to the English League came shortly after he had made his International debut in a friendly against Sweden, coming on at halftime in a 4-1 defeat at Malmo.

He was also on the Irish bench for 15 Internationals, playing second fiddle to the 47-capped Alan Kelly. His two seasons at Cardiff were disrupted as a result of a collar bone injury, and where he was described as ‘Daredevil Irishman as his injury record shows’. For his height he was surprisingly agile when dealing with ground shots.

In June 1963 he moved to Hull City for a fee of £3,000 and won a Third Division Championship medal in 1965-66. In the same season he was a key member of the squad that reached the last eight in the FA Cup, losing out in the 6th round to Chelsea in a replay.

After 8 English League seasons and 118 League appearances, he returned to Ireland in November 1968 after a two-year battle with Hull, who had been refusing to release him although he had lost his first team place. The issue was finally settled before an English League Tribunal when he was granted an unconditional release from his contract.

Maurice made his Dundalk debut on December 1st 1968 against Drumcondra. Tommy’s judgment and timing was excellent—a 3-1 debut victory was the beginning of a 7-match winning run and an aggregate scoreline of 22 for and only 4 against. During his first season he made 21 appearances fronting a defence that conceded a very respectable 21 goals.

His sole competition honour at Oriel Park was in the City Cup on St Patrick’s Day 1969, when Dundalk recovered from a half-time two goals deficit to shock Shamrock Rovers, hitting five goals in the second period.

He would not have fond memories of his European experiences. With Drumcondra in the 1959 Champions Cup there was a 13-1 aggregate against Athletico Madrid while Dundalk suffered an aggregate 14-0 loss to Liverpool in the 1969 Fairs Cup that included a 10-0 mauling at Anfield Road from the first of Bill Shankley’s great Liverpool combinations.

When Liam Tuohy had a financially induced clearout at the beginning of the 1970-71 season, Maurice returned after a ten-year absence to Drumcondra, the club he had been with from the age of 16. When he departed from Tolka Park in January 1972 he had completed 78 League and FAI Cup appearances over his seven seasons with the Tolka Park club.

He joined Finn Harps for the balance of the 1971-72 season, making 10 appearances and helping Harps to a fourth place League finish and qualification spot for the Top Four Cup. When he was with Dundalk his brother Tony was keeping goal with Co. Louth neighbours Drogheda United.

He tried his hand at football management when leading Amateur League Drumcondra Rangers to a final spot in the prestigious Harding Cup in 1983. An electrician, specialising in the TV business, he has worked as electrician and gaffer on a number of high profile TV programmes and films, including five episodes of ‘Father Ted’. He now resides in Co. Waterford.