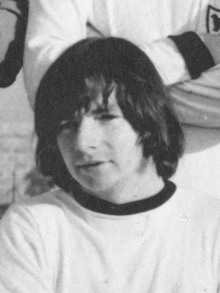 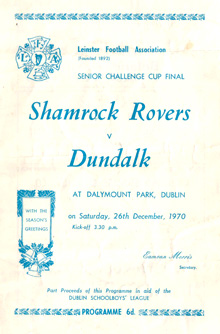 Sean Kelly’s first club was Herberton United from Rialto, before moving to Bolton Athletic, under Hugh Fleming, to a squad stuffed with future stars—Paddy Roche and Ray O’Brien (Shelbourne, Manchester Utd. and Ireland), Charlie Hendricks, Willie Byrne, Paddy Dunning and others who played in the League of Ireland.

Although an under-17 squad, they won the prestigious Dublin Schoolboys League Younger Cup for under-18s and a year later repeated the feat under a change of name—this time as Reds United.

Sean joined Transport in the Leinster Senior League and won a Metropolitan Cup medal when St James’s Gate were defeated in the final.

An approach from Hugh Fleming, now with Liam Tuohy at Dundalk, was enough to entice Sean to Oriel Park for the 1970-71 year. He made his debut in a Shield game against Sligo in August and from the end of November his name was on every team sheet, barring the odd injury.

For his three full seasons practically every team line-out read—Right full Sean Kelly, Left full Fran Brennan. Sean’s goals were a bit of a rarity but in March 1971 he scored a special one when his lone goal against Shelbourne sent Dundalk through to the final of the City Cup.

The highlight of his Dundalk stay was winning the Shield in the 1971-72 year, only the second time that this trophy had resided at Oriel Park. The arrival of Dougie Devlin for the 1973-74 season restricted Sean’s opportunities early in the year, but he became disillusioned with the style of manager John Smith and left the club in mid November. He later played with Anner United in the Leinster League.

Residing at Kill in Co. Kildare he was for many years a transport manager with a newspaper distribution company.

After a battling 3-3 draw with Shamrock Rovers at Milltown, the Democrat took a shine to Sean: “Young full-back, Sean Kelly, looks a good prospect … what he lacks in inches he makes up in courage and skill … tenacious tackler … needs more polish but under Tuohy he’s learning fast.”