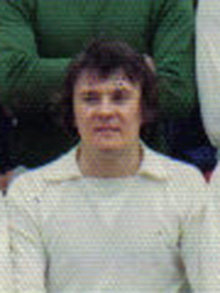 The son of 5-times Irish International Hugh Davey, Con was the third of the Davey brothers to play with Dundalk, following Pat and Terry.

Just 15 years old when he joined Coleraine, with whom he won Youth and Junior caps, he won an IFA Youth Cup medal with Coleraine Reserves he pocketed an Intermediate Cup medal.

A very strong player and good in the air, John Smith converted him to a centre back and with Jackie McManus he filled the central defence role. Con was practically an ever-present during his first two years with the club, missing just four games.

The arrival of Jim McLaughlin and the acquisition of the McConville brothers increased competition for places in the middle of the defence and after starting in the opening three games in the Championship-winning 1975-76 year, Con lost his place.

Con spent the summer of 1974 playing in the North American Soccer League (NASL), lining out with Toronto Metros in the Northern Division where they finished runner up to the Boston Minutemen, losing out to Boston in a play-off. The league was at its half-way point when Hugh started and he became an ever present for the remainder of the season, making 11 appearances.

In 1977-78 he was back with Glenavon and although dogged with injuries he finished the season as Player of the Year. A multi-purpose defender, slotting in easily at either midfield or right-back, he was appointed club captain. Although injury prevented him from appearing in the 1978-79 EUFA tie against PSV Eindhoven a second place finish in the Irish League earned another EUFA entry for the following season.

His son, Hugh, has collected an impressive batch of representative honours, in the Irish League, the League of Ireland and for his American College team, where he earned selection for All-Region, All-Conference and All-American teams. A Northern Ireland Schoolboy International, he had a spell at the Blackburn Academy and returned afterwards to join UCD on a sports scholarship. In 2003 and 2004 he added 3 Northern Ireland Under-21 caps and an Under-23 cap to his cv.

His League of Ireland clubs also included Bray Wanderers and he was with Dublin City when they folded during the 2006 season. In May 2004 he was on the Eircom League squad in the four nations semi-professional tournament in Aberdeen. He has recently concentrated on Gaelic football, playing with Newry Shamrocks, and has represented County Down.