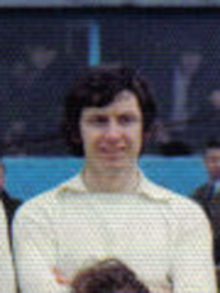 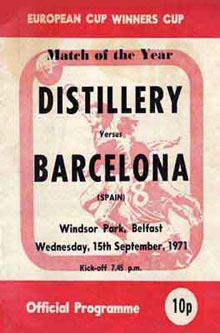 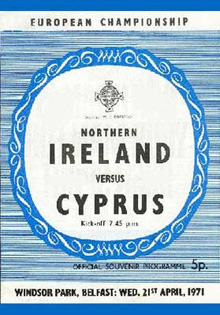 There were no shortages of fresh faces around when John Smith launched his 1973-74 season squad at Oriel Park in August 1973. Six players made their club debut in the opening day Leinster Cup fixture against Shamrock Rovers, including ex-Distillery and Northern Ireland International Peter Watson.

Peter had sampled football at Bessbrook Wanderers and Newry Town, before a spell with Aston Villa in 1960-61. His re-introduction to Irish League football was with Glenavon, where he won Ulster Cup (1962-63) and City Cup (1965-66) honours, but failed to add an Irish Cup winner’s medal when losing to Coleraine in the 1965 final.

He was transferred to Glentoran in the 1968-69 season making 19 appearances. Unable to command a regular starting spot at the Oval, in the winter of 1969 he moved to Distillery as part of a player-exchange deal which saw Distillery’s ace striker Gerry McCaffrey sign for the Peter McParland-managed Glentoran.

Over the following four seasons, playing inside right, he became a key member of the Distillery set up, and by the time he left for Dundalk he had made 148 appearances and scored 61 goals. 1970-71 was a memorable season, both for Distillery and for Peter, when with the 18-year-old Martin O’Neill as his inside partner the Whites won the Irish Cup, defeating Derry City 3-0 in the final.

As well as being the club’s leading scorer with 27 goals, two weeks after the Cup final success Peter received his only International cap in a European Championship qualifying game against Cyprus, making his appearance as a sub in the 88th minute, and his two minutes international career is the shortest on record.

With Dundalk he failed to match his Irish League successes and his sole Oriel Park win was in the Leinster Cup in his first season, when Bohemians were defeated 1-0 in a replay. After the departure of manager John Smith, a couple of months into the 1974-75 year, Peter took on the job of caretaker manager for a number of weeks until the appointment of Jim McLaughlin at the end of November 1974.

At the end of the season he transferred to Portadown. He later served as player/manager with Dungannon Swifts, as coach at Rathfriland Rangers, as coach and assistant manager with Glenavon and in January 1994, almost twenty years after he left Dundalk, he became manager of Newry Town.

Since his Newry resignation in February 1996, he has managed Banbridge Town, Rathfriland Rangers and Lurgan Celtic. In August 2008 he was appointed Chief Scout at Glenavon, where his son, Ryan, was also on the management staff.