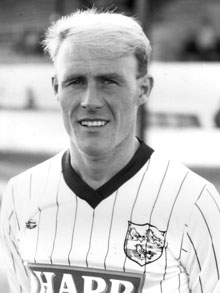 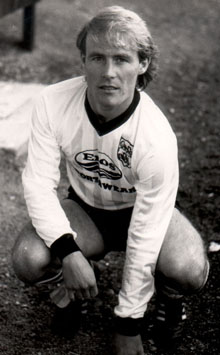 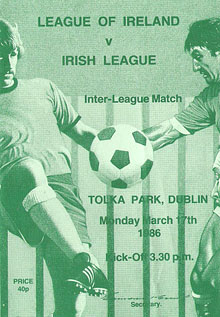 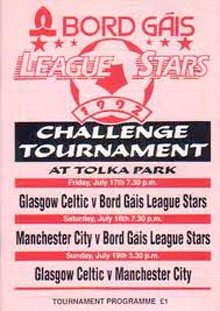 Captain of the Irish Schoolboys’ under-15s team when playing at centre-half, classy Dave O’Connell had a well-earned reputation as one of the best attacking full-backs in the League of Ireland during his 6-season spell with Bohemians. Debuting at Dalymount in the 1979-80 season under Billy Young, he also earned League of Ireland Inter-league caps, but the major trophies eluded him during this period.

For four consecutive years Dave collected runner up mementos—for the FAI Cup in 1982 when losing to Limerick and the following year to Sligo followed by two League second spots, in 1983-84 and 1984-85, when Jim McLaughlin’s Shamrock Rovers were lording it over everybody. The 1981-82 Cup loss followed a magnificent semi-final win over Dundalk after a four-game marathon.

Dave was one of the first signings made by Turlough O’Connor when he was appointed Dundalk manager in the summer of 1985, and by the following January Dave had added another silver medal to his collection, this time in the League Cup after losing in the final to Galway United.

An early season mystery injury in the following season—later diagnosed as caused by a piece of bone lodged in the muscle of his upper leg—severely limiting his appearances, meant missing two more runner up spots in League and FAI Cup when Dundalk failed to get the better of the high-flying Shamrock Rovers.

He was unable to dislodge Joey Malone from his full-back slot in the 1987-88 Double-winning season, and after being made redundant (he was a bricklayer with CIE), he decided to emigrate to America in January 1988 and he spent eighteen months in San Francisco playing in the North Californian League with the Greek Americans side.

On his return to Ireland, he was snapped up by Noel King, Shamrock Rovers manager. King, with a mission to restore the post-Milltown Hoops to their former glory, converted Connell to a midfielder and over a three-season spell he became one of the leading midfielders in the National League. In January 1991 he won his first Soccer Writers Player of the Month Award, twelve seasons after making his League debut.

He was also voted Rovers Player of the Year for the 1990-91 and 1991-92 years but he again fell short where the major competition honours were concerned. In 1991 he collected his third FAI Cup runner up medal when Galway United, fielding a couple of his ex-Dundalk colleagues—John Cleary and Larry Wyse—got the better of Rovers in the final.

Leaving Rovers after the 1991-92 year, he spent a season in the Irish League with Ards where his ‘never say die’ midfield leadership spurred the team to a mid-season club-record fourteen matches unbeaten record and in the second half of the year to an Irish Cup final appearance. But in a three-match marathon, local rivals Bangor won the second replay with a goal in the last minute and Dave added an Irish Cup runner up medal to his three FAI runner up mementos.

For a fee of £2,500 he moved south, this time to Drogheda but even the arrival of Jim McLaughlin as manager, after the departure of Pat Devlin, couldn’t save the Boynesiders from last place and demotion.

Dave’s last playing stint was with Division One Limerick, where he spent five seasons, finishing up as playing-manager until he was sacked in February 1999. The best achievement in this period was to reach the play-offs in the 1997-98 year, only to be defeated 5-2 over two legs by UCD who retained their Premier Division status.

Dave’s final involvement in the National League was in the 2000-01 period as manager of Galway United, leaving in October 2001.