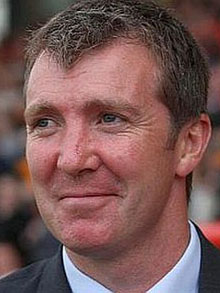 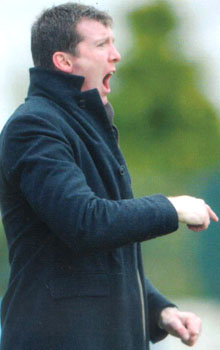 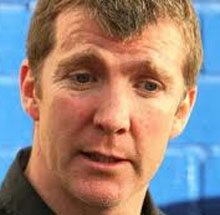 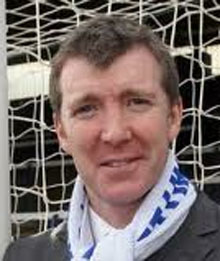 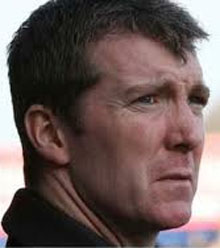 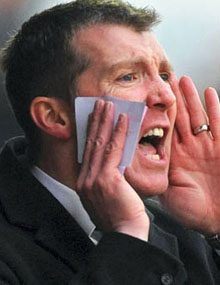 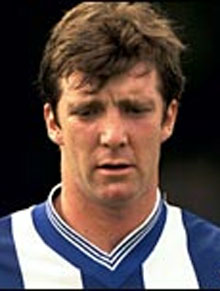 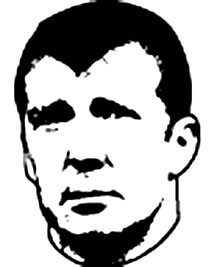 Jim Gannon was just past his 19th birthday when he made his Dundalk debut in September 1987 and shortly afterwards he made his Oriel Park debut when Shamrock Rovers won a penalty shoot-out in the final of the President’s Cup.

His third and last appearance in the Double winning season was against Limerick at Oriel Park on February 7th 1988, when he replaced Dessie Gorman in a 4-0 win. Under Tommy Connolly, Jim was a member of the Reserve’s squad that won the Blackthorn Trophy.

For his second club season, after a substitute appearance against Red Star Belgrade in the home tie, his early season form saw him take the place of Dave Mackey. Of his 37 club games, 19 were at Oriel Park and the President’s Cup penalty loss was the only home defeat he suffered in domestic competition. Shortly after his last game, in a 5-2 win at Limerick on April 5th 1989, he was transferred to Sheffield United.

He never settled at Sheffield and after a loan period with Halifax Town he was transferred to Stockport County in March 1990. Over the following ten seasons he would become a Stockport Legend, making 479 club appearances, placing him third on the club’s all-time appearances list.

The County fans have honoured him on several occasions—electing him to the Stockport Hall of Fame and to the prestigious position of Honorary Vice President of the Hatters Independent Supporters Club. In 2001 he was voted on to the County’s Team of the Century.

During his ten club seasons it was a rare year that Stockport were not in contention for promotion. Jim played in all four of the County’s Wembley play-off appearances and was a member of the successful 1996-97 squad that earned First Division status.

He holds the rare distinction of having scored in all four English League Divisions, as well as the FA Cup, League Cup, League Members Cup and the English Play-offs, to which he has added the LOI Premier Division, FAI Cup, League Cup, UEFA Champions League, UEFA Cup and UEFA Cup Winner’s Cup.

After a testimonial match against Manchester City in August 2000 and a short loan period with Crewe Alexander, he returned to Ireland. Over four seasons with Shelbourne he won two League Championships (2001-02 and 2003). Appointed the Reds skipper, he also took time out to complete his accountancy qualifications and to secure his football coaching badges.

In June 2004 he took his first step into management, returning to his first club, Dundalk, at a time when the resources necessary for the construction of a squad with promotion prospects was severely constrained by the club’s precarious financial position. Jim stayed until the second last match of the 2005 season, having steered the club to an anonymous mid-table position.

He did leave a mark that is likely to survive for a long time—his last match in charge, a 0-0 Oriel Park result against Cobh Ramblers, was the tenth successive draw. The English League’s record, going back to its formation in 1888, is 8 consecutive draws, achieved by 4 clubs.

He returned to Stockport County, being appointed manager the following December. Ever the one for the roller-coaster route, he managed a last-day escape from relegation (2005-06), led them to a League record nine-victory run without conceding a goal, missed a play-off spot on goal difference thanks to a set of last day results (2006-07).

For the following year he led them to success in the play-offs and finally in 2008-09 he was still at his post at the end of April when due to financial difficulties Stockport were placed in administration and deducted 10 points.

In June 2009, he was appointed manager of Motherwell, and with threadbare resources led them through two rounds of the Europa Cup. But after six months, described as a “brief but colourful tenure” and following a series of high profile disputes with referees, he was sacked at the end of December, apparently because he was refusing to sign a contract.

By February 2010 he had found employment with Peterborough United. However within six weeks it was announced that Jim would be leaving at the end of the season.

A stint at Port Vale lasted only ten weeks before in Novenmber 2011 he again returned to Stockport , now re-located to the Conference League after an unbroken 110 years in the Football League, as Director of Football.

The merry-go round continues….