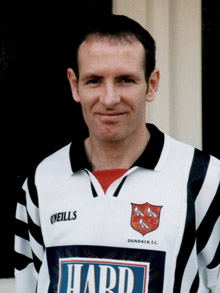 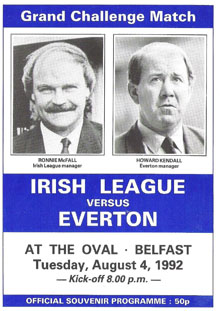 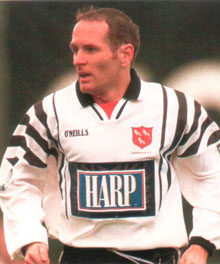 Midfielder Raymond ‘Soupy’ Campbell had won all the Irish League top honours before coming to Dundalk in August 1996.

18 years old when he signed for Notts Forest, then under Brian Clough, he spent most of his time with the reserves where he won a Central League Medal. He spent loan periods with Cambridge United and Hereford United before returning home.

Martin O’Neill alerted Glentoran to Ray’s impending return and he joined the Glens during the 1988-89 season.Over the following 5 seasons, when he made 193 appearances, he collected all the Irish League trophies, including the Irish Cup (1989-90) and the League Championship (1991-92).

Switching to the Glen’s great rivals, Linfield, (fee £33,000) for the 1993-94 term he immediately added a League-Cup Double to his honours and before joining John Hewitt’s new Oriel Park squad in the summer of 1996 he had added a further Irish Cup to his collection as well as the League and Floodlit Cups (93-94), and the Co Antrim Shield (94-95).

Speedy and light-footed, he had the capacity to turn a game with his mazy runs and clever play. He was a key member of Dundalk’s squad for his Oriel stay and was the fan’s choice for 1996-97 Player of the Year. He had no competition honours to show for his three seasons which included a relegation play-off in his first term. He left after the 1998-99 demotion and went to Portadown.

He had later spells with Newry (Oct ’99), Crusaders (Feb ’01) and Ards (Aug ’02). Following the late 2003-04 season resignation of Shane Reddish as Ards manager, Soupy was one of a triumvirate appointed to see the year out and to successfully keep the club in the Premier Division.

When he finally called a halt to his Ards career at the end of the 2005-06 season, his four seasons there had added another 150 games to his cv. His League games alone, spanning 17 seasons, aggregated to over 400 games.

A year later, aged 39, it was announced that he had signed a one-year contract with Armagh City for the 2007-08 season!

While his Dundalk spell had offered no opportunity for European football, his Euro cv included 6 appearances (Glentoran 5, and Portadown 1).