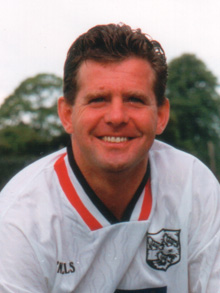 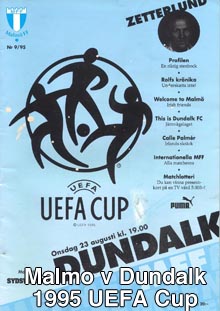 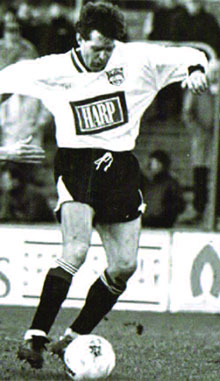 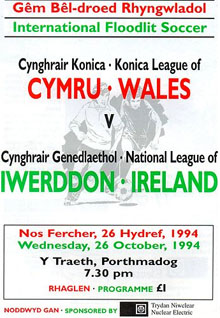 While working in An Post and playing for YMCA in Sandymount, a friend of John Coady introduced him to Shamrock Rovers Reserve manager, Noel Campbel, and a trial was arranged.

He made his National League debut with the Johnny Giles-managed first team in October 1982 as a striker, scoring twice against UCD in a 2-2 draw. Converted to a full-back, he earned Inter-League and Olympic representation as well as a clutch of competition honours under Jim McLaughlin.

Spotted by Chelsea when playing in an Olympic Qualifier against Hungary, he moved to Stamford Bridge in December 1986 for a £25,000 fee. Debuting for Chelsea in the following April, he scored in a 1-1 draw with QPR.

Early in the 1988-89 season he returned to Ireland, signing again for Jim McLaughlin, now managing Derry City. His English League career consisted of 16 League games—7 as sub—and scored 2 goals. With Derry the competition honours flowed again and in his first term he was a member of the Treble winning squad, picking up the League, FAI Cup and League Cup.

After four Derry seasons he returned to Shamrock Rovers in 1992-93 and spent the following term helping First Division Monaghan United to promotion before answering Dermot Keely’s call to come to Oriel Park for the 1994-95 Championship-winning season, gaining his fifth Championship medal. He also joined an elite group who have won Championship medals with three clubs—3 Shamrock Rovers, 1 each with Derry City and Dundalk .

Dundalk’s surprise victory caught the national press unawares and John was the only member of the squad to be selected on the short-listed 33 players from which the 1995 Bord Gais League Stars was selected. He was also appointed captain of the National League team for that year’s successful outings against Welsh League (1-0) and Swedish League Champs IFK Gothenburg (another 1-0 victory).

He finished his career with spells at Home Farm, Drogheda and finally a second trip to Monaghan at the age of 38 for the 1998-99 term, topping out his National League career appearances to 350 (16 subs) and scoring 37 goals.

Coady had played at schoolboy level with Leicester Celtic and at junior football with YMCA. Playing in the same team as Paul McGrath his junior successes included winning both the Leinster Senior League and the Oscar Traynor trophy.

After retiring he had a short spell coaching at Longford Town and has coached St. James' Athletic in the Leinster Senior League.

A life-long Shamrock Rovers supporter, he is a season ticket holder at Tallaght.