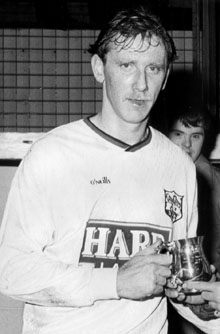 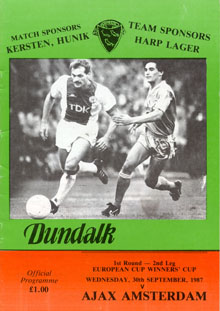 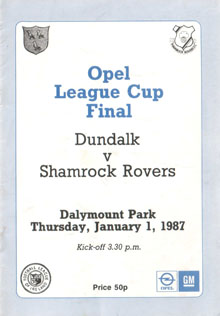 From St Joseph’s Boys Schoolboys team, the eighteen-year-old Mick Shelley joined Bohemians, then under Billy Young and stayed at Dalymount Park for seven years. He became a first team regular during the 1980-81 season but during this time Bohs became perennial bridesmaids and never the bride.

The 1982 Cup loss to Limerick was particularly heartbreaking after their win in the outstanding 4-match semi-final marathon with Dundalk—Mick scored in the third replay to send the game into extra time. In the following year it took three semi-final games to overcome Drogheda, but this time another provincial club, Sligo, prevailed in the decider.

After successive second place League finishes, each time to their old foes Shamrock Rovers, Mick had accumulated four runners up awards in successive seasons. He was released after the 1984-85 loss and Turlough O’Connor invited him to Oriel Park.

But in his first two years with Dundalk he failed to break his loss sequence after adding League Cup (1985-86) and League (1986-87) runners up medals to his growing collection. He was also playing in a very experienced and competitive squad—no one was guaranteed their place. Complicating matters was that his favourite positions were held down firmly and there was little prospect of him dislodging Martin Lawlor at left back and Barry Kehoe at left side midfield.

Mick had to reinvent himself and in the process became a leading candidate for the title of Dundalk’s Best Ever Utility man. Left, right and centre back, all the mid-field slots—it made no difference to him. In the critical run-in over the last eight League games in the 1987-88 term, he was called on to cover for injuries to both Lawlor and Kehoe and nobody savored the Championship medal more than Mick.

By the time that the 1990-91 League Championship had rolled around, half of the 1987-88 Double squad had left and Mick had found a new role. Now an ever-present, he was the mid-field workhorse who demonstrated his value during the post-December 16-match unbeaten run-in to the club’s eight League pennant.

At the end of the 1992-93 year, after eight seasons at Oriel Park, Mick took his leave and ended up with the Pat Devlin-managed Drogheda, but with the Drogs in trouble Pat resigned and by the end of November Jim McLaughlin had arrived. Although he enticed Barry Kehoe to come on board, to be joined by other ex-Oriel Parkers Dave Connell and Paul McLaughlin, they couldn’t prevent Drogheda slipping down to Division One.

Mick stayed at United Park for the following year as Jim steered Drogheda straight back to the Premier Division after finishing second in Division One to UCD. When he turned up for 1995-96 pre-season training, his last National League season, he found another Dundalk exile in the dug-out—Martin Lawlor had become Jim McLaughlin’s assistant in the close season. But there was no joy for the ex-Dundalk contingent as Drogheda went straight back down to the lower division.

His most recent trip to Dundalk was in November 2009, starring in Dundalk Legends 2-1 victory over the Manchester United Vets.