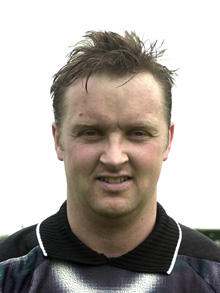 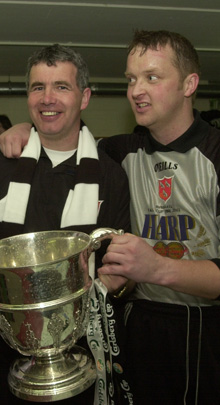 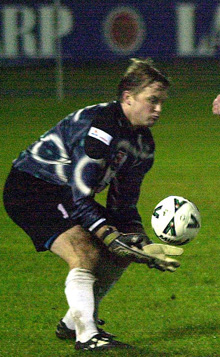 John Connolly won the FAI Cup and League of Ireland First Division in two spells with Dundalk in a career that also included an FAI Cup success with Bohemians and numerous Irish under-age international caps.

He was initially involved as goalkeeper with Bluebell United’s U13s-U16s in teams that featured Stephen Kenny at centre-half and Paul Byrne in midfield, before signing for Cherry Orchard (U18s). It was to be the springboard to his LOI career, but by then, he was an established Republic of Ireland under-age ‘keeper, having played at U15, U16, U17 and U18 level.

Even before he made his LOI debut, he featured for an Ireland B international selection in 1989, selected by Jim McLaughlin, for a friendly match versus an Australia XI.

He would later be capped at U20, U21 and U23 level, the highlight being his inclusion in the first team quad that played in the FIFA World Youth Cup (U20) finals – and which featured an opening match versus hosts Portugal (including Luís Figo, Rui Costa and João Pinto) at a packed Stadium of Light in Lisbon.

His first team debut at LOI level came with Eamonn Gregg’s Bohemians in ‘90/91. Though he would go on to win the 1991 Opel Young Player of the Year, Connolly would remain as understudy to Dermot O’Neill until the ‘91/92 season - when O’Neill moved to Derry.

It provided Connolly with his chance, and he was No1 for Bohs’ FAI Cup final defeat of Cork City. Gregg would eventually depart to Shelbourne, and Connolly followed, only to see the manager replaced and Alan Gough installed as No1 at Tolka Park, where Damien Richardson was now manager.

He arrived at Oriel Park in February 1996, barely having time to say hello to the departing Dermot Keely, and played in the last ten 1995-96 matches covering for the absent Eddie Van Boxtel. He followed Keely to Finn Harps (where he signed a contract, but never played) and then to first division Athlone Town, where Keely also only survived a short while before being replaced by Terry Eviston. For Connolly, this ended up with a loan spell at Alfie Hale’s Kilkenny City (‘97/98).

Though the season ended in relegation from the top flight, he stayed as No1 in the first division with the Cats for 1998/99 (whilst training with Whitehall Rangers) until Pat Byrne arrived leaving Connolly to move to Dundalk for 1999/2000, then managed by Eviston.

After four Oriel Park seasons, he left to join Crusaders, on loan before playing for Ollie Ralph’s Newry Town. He returned to the LOI in 2005 for Kildare County under John Ryan, until a recurring Achilles injury resulted in him drawing his career to a close with a LOI career that aggregated to 200 League match appearances with 5 clubs.

Two terms at Oriel Park, the first for a ten-appearance cameo at the end of the Keely era (when Eddie van Boxtel was sidelined), and then four seasons under Eviston, Martin Murray and Trevor Anderson -summarises John Connolly’s tenure at Dundalk.

For the 2000-01 First Division Championship victory he shared the goalkeeping duties with Brian McKenna who made 21 appearances against John’s 20. For the next season that saw an FAI victory and relegation, John was an ever-present playing in all 41 season games.

He tussled for the goalkeeper’s jersey with Brendan Murphy and Brian McKenna under the first two managers before Murray’s replacement Trevor Anderson settled on Mick Dempsey as his No1 leaving Connolly to decide that his future lay with Crusaders in 2003.

When he passed the 100 appearance mark he became the 8th Dundalk keeper to exceed a century of appearances but was only the third to leave the club with winner’s medals for both the FAI Cup (2002) and League (First Division 2000-01), following in the footsteps of Richie Blackmore and Alan O’Neill. Gary Rogers, with his 2015 accomplishments, completes a quartet of custodians with League/Cup honours.